Where in the world is Riley Shih Tzu? Our new adventure series of Shih Tzu Travel. 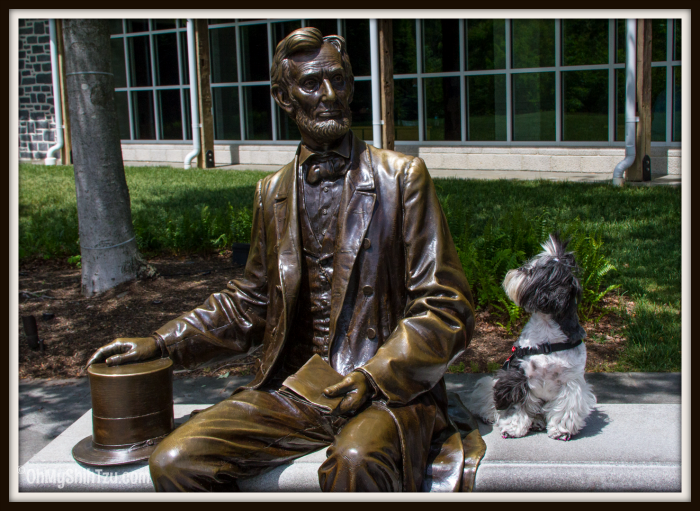 Yes you might have thought that we were in Illinois, the Land of Lincoln, but here is another little hint:

Four score and seven years ago our fathers brought forth on this continent, a new nation, conceived in Liberty, and dedicated to the proposition that all men are created equal.

Now we are engaged in a great civil war, testing whether that nation, or any nation so conceived and so dedicated, can long endure. We are met on a great battle-field of that war. We have come to dedicate a portion of that field, as a final resting place for those who here gave their lives that that nation might live. It is altogether fitting and proper that we should do this.

But, in a larger sense, we can not dedicate — we can not consecrate — we can not hallow — this ground. The brave men, living and dead, who struggled here, have consecrated it, far above our poor power to add or detract. The world will little note, nor long remember what we say here, but it can never forget what they did here. It is for us the living, rather, to be dedicated here to the unfinished work which they who fought here have thus far so nobly advanced. It is rather for us to be here dedicated to the great task remaining before us — that from these honored dead we take increased devotion to that cause for which they gave the last full measure of devotion — that we here highly resolve that these dead shall not have died in vain — that this nation, under God, shall have a new birth of freedom — and that government of the people, by the people, for the people, shall not perish from the earth. 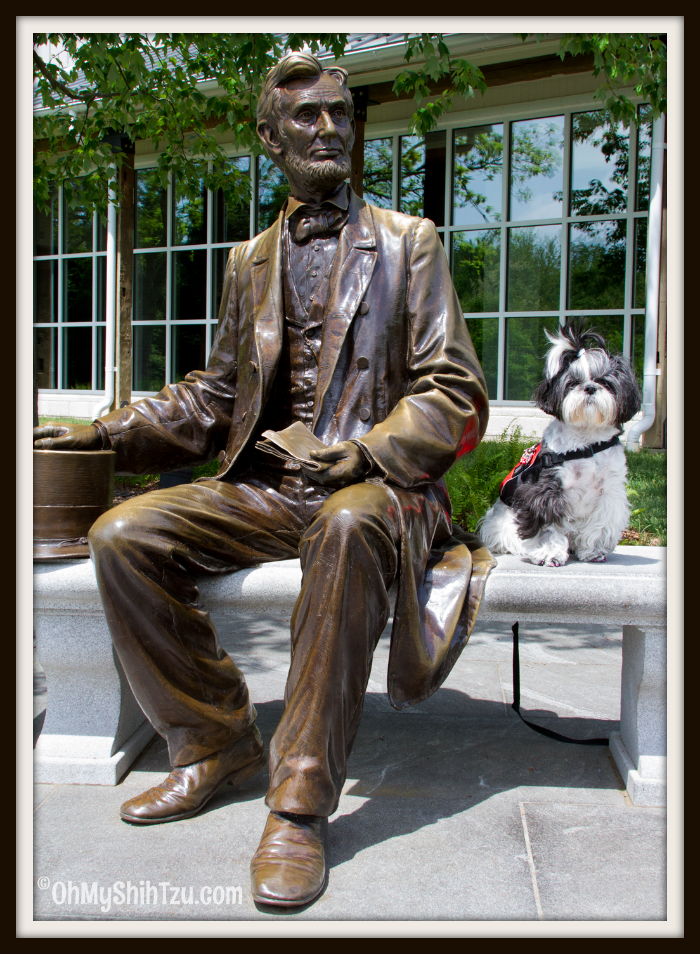 Riley is sitting next to a statue of President Abraham Lincoln in the Gettysburg National Military Park, just outside the visitors center.  This would be the site of the largest battle ever waged during the American Civil War. Fought in the first three days of July 1863, the Battle of Gettysburg resulted in a hallmark victory for the Union and successfully ended the second invasion of the North by General Robert E. Lee’s Army. It was also the bloodiest single battle of the war, resulting in over 51,000 soldiers killed, wounded, captured or missing. To properly bury the Union soldiers who died at Gettysburg, a Soldiers Cemetary was established on the battleground near the center of the Union line. A dedication ceremony was held on November 19, 1863, and this is where President Abraham Lincoln gave his most famous speech, the “Gettysburg Address”. 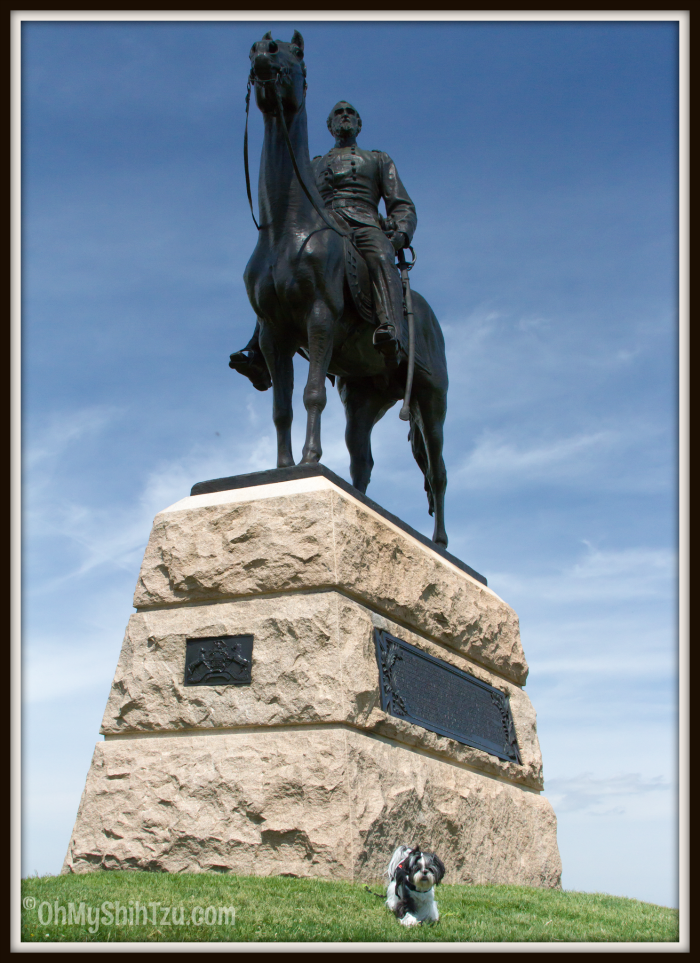 Riley had so much fun visiting the many statues and monuments to the soldiers . Here Riley is running down the hill of Cemetary Ridge after visiting the statue of Gen. Maj. George Meade on top of his horse “old Baldy”, who he purchased for $150 in 1861. The General would ride him in several battles, but on the second day of the battle of Gettysburg  Old Baldy was wounded. He recovered and General Meade rode him until April 1864, after which he was retired and lived to be 30 years old.

Unfortunately I couldn’t get a good picture of her because every time I knelt down to take a picture she would come running, like she was trained to do! Mommy is in trouble, gotta get to her fast.

We only walked a few of the battlefields, but here is the walkway leading to Cemetary Ridge. It  was so peaceful and serene, with a slight breeze. To know that during this battle 51,112 Soldiers were killed, wounded or declared missing from the Battle of Gettysburg is a very sombering experience. 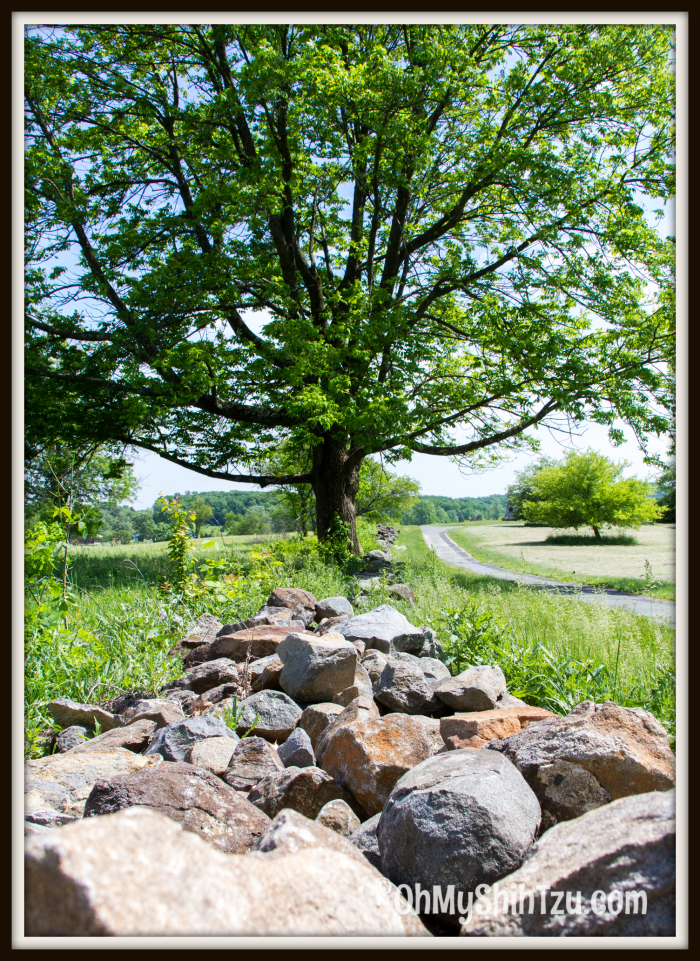