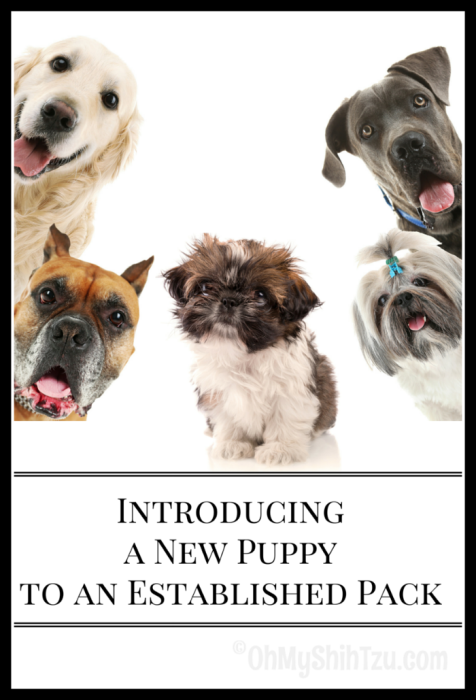 Since I was coming back to the West Coast from the East Coast I took a slightly different approach as I was arriving home late in the evening. If you remember I had set up the puppy’s new play area in my office. I knew that the moment I walked through the door when I got home I would be greeted by 4 bouncy little dogs, so I had to make sure to hand off the new puppy to my husband prior to walking into the house and since everyone would be distracted by me, my husband could easily whisk him away to the office undetected. My plan worked perfectly! The girls never noticed that the puppy entered the house as they were giving me kisses galore! My husband took Kevin into the office and placed him in his little play pen and waited for me to bring in the girls for a proper introduction. I started out by bringing each Shih Tzu into the room one by one so they could check out this little stranger that was going to be invading our lives. Since I know the personalities very well I watched for any signs of hostility, such as growling, barring teeth, hackles raised, straight tail, etc., not that I thought there would be any. Luckily for us each introduction lasted between 1-3 minutes depending on the dog and there were no signs of hostility.  All introductions started out with the puppy in the play pen and the girl(s) on the outside of the pen. Within 15 minutes the puppy had been introduced to Riley, Trixie and Katie, and all seemed to be okay with the fact that he was home.

Since dogs don’t “talk” like we do, we need to make sure we know what our dogs are saying by their body language. Today I’m sharing a wonderful graphic by Artist Lili Chin and her dog Boogie on body signals. 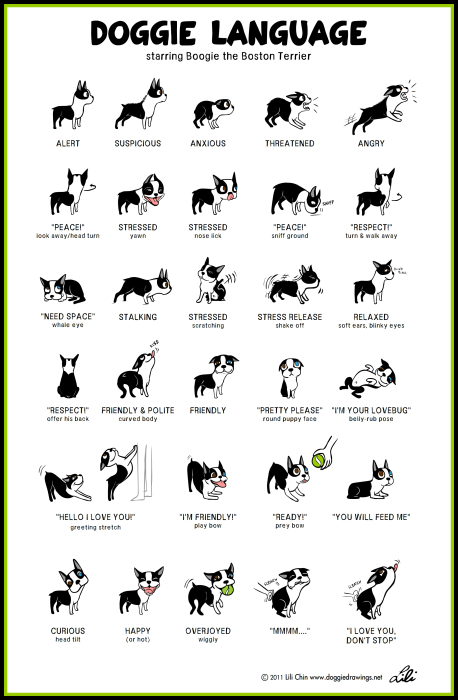 Now dogs have a lot of signals that they give to each other, so be sure to watch for anything out of the ordinary.

In our house dog to puppy corrections are a much-needed lesson of life. Since Kevin hasn’t started puppy class yet, it is up to the girls in the house to set his boundaries. Now I only allow this because the corrections from dog to puppy are not that severe. Katie and Trixie growl, bares a little teeth with a little bit “in your face” action but does not actually make contact with him, Riley will roll him and keep him in a submissive position. All of which needed to help keep his craziness in line. Now corrections don’t hold true for all dogs in the house. As you may know I have a pretty large pack with 2 larger dogs than my Shih Tzus, one a Boston Terrier, who at 22 pounds is a muscled force to be reckoned with, along with a Husky/Border Collie mix who at 55lbs can cause some damage. When introductions were made I was very careful in watching all signals given by each of these dogs.

Cats are great and a majority of Shih Tzus love cats, but you have to take precautions when introducing a new puppy to a cat. The last time we brought a dog into the house (which was 3 years ago with Chicky, non Shih Tzu) Ninja went ballistic. So I knew her personality might possibly take so kindly to a new dog. Keeping her at a distance was of utmost importance to keep the puppy safe. I’ve come up with a few tips to help with the transition for my cats when  a new family member enters the house:

Luckily for me, Ninja has been with other Shih Tzus since she was 5 weeks old and she took to Kevin happily. She is gentle with him, plays with him, gives him proper little slaps (no claws) when he pushes a little too much, and allows him to crawl on top of her and chew her ears. Yes she is a very tolerant cat. So hopefully if you’ve had a cat that has had contact with many different dogs in her critical socialization age for cats ( 2-7 weeks, up to possibly 10 weeks of age) then you will probably have a good luck introducing your new Shih Tzu puppy. For more information on cat introductions with other breeds of dogs and what to take into consideration I suggest reading Introducing Dogs & Cats by Jackson Galaxy. 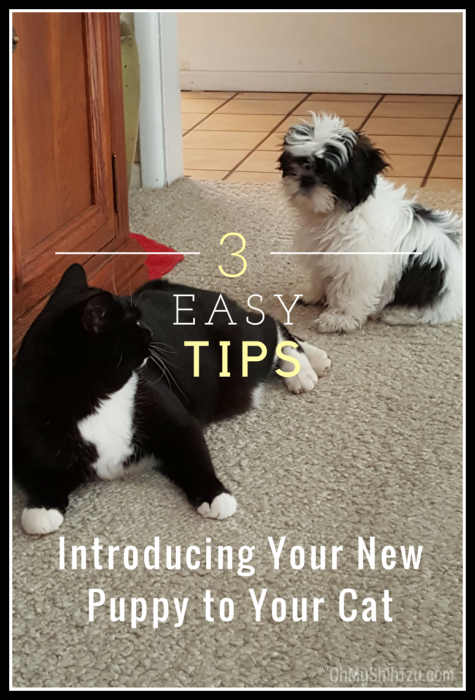 Lets face it, at some point you are going to have to leave your pets alone. But until you are 100% , without a doubt sure that the puppy would be safe with your new dog or dogs, don’t leave them alone together. After getting our puppy we stayed home with him for the first 3 days, but we finally had to leave him alone in his little playpen area in the office. What I soon realized was that he had never been alone by himself and this was a little too traumatic for him. Since he was getting along great with Riley I decided to give him free reign of my office with Riley. Since that was a success I then threw Trixie in the mix, and finally Katie. Within a week, we had created a safe environment for him when we left home with the girls.

Remember your puppy depends on you. Don’t ever leave your puppy alone with an adult dog until you are 200% sure that your adult dog will not turn on your puppy. Now even after 7 weeks, Kevin is never unsupervised with Sunny or even Daisy. Though Sunny doesn’t bite, she will pin down another dog, that is her M.O., this in turn would crush Kevin and kill him. Daisy has a habit of hitting with her paws, again another possible eye injury. So know your other dogs and protect your puppy, even be a crazy helicopter mom for the first year. Your puppy is depending on you.