Last month the Shih Tzu house was rocked with the news that Trixie’s mammary tumor came back positive for mammary adenocarcinoma. The phone call was not the one I wanted to receive. I knew what the results were going to be when I heard my veterinarian’s voice on the phone. The chances were 50% that the tumor would be malignant, but I was hoping for a better outcome that the tumor would have been benign. Luckily the tumor was very small and we will not have a re-occurrence, nor will there be any metastasis of the cancer. My vet took, what seemed to me, a very large margin around the nipple. Yup she is now missing a teat!But is was the  Monthly Breast Exams  I began in January that made the difference.

So today Oh My Shih Tzu, along with a couple of our blogging friends Dogthusiast and Pawesome Cats  are launching  Check the 8 on 8! 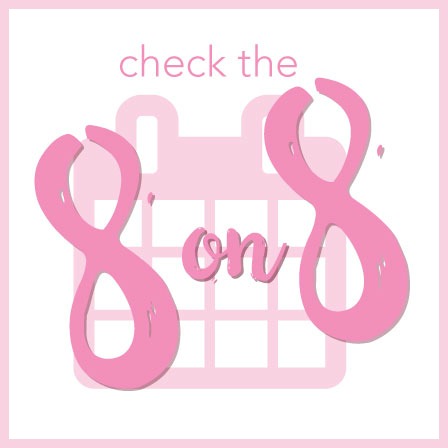 The best defense against mammary (breast) cancer in dogs is to find it as early as possible. Since a dogs teats are relatively small, doing a monthly check  is easy but there are a few things you want to look for.

Who is at Risk?

According to the American College of Veterinary Surgeons:

What You Can Do

Every month on the 8th, take a few minutes to check your female dogs and teats. It’s these few minutes every month that can save your dog from breast cancer. If you suspect a lump, make an appointment immediately with your veterinarian, inspection alone can not determine if the lump is benign or malignant.

Join us next month June 8 for the first Check the 8 on 8 blog hop! Lets spread the word