In this and following posts I will refer to my Canon 7D, but it really doesn’t matter if you prefer Sony, Nikon or any other type of dSLR. This is my second dSLR and it was chosen specifically because of the speed of the camera. My first dSLR was also a Canon. But you don’t need a fancy dSLR to take great pictures…

So why do I love my dSLR?

Unlike a compact camera you can quickly turn on your dSLR and capture that special moment. A compact digital camera can take up to a second to turn on, another second once you press the shutter release and another second to take a picture. By this time 3 seconds have passed and so has the moment! I’m sorry to be blunt but this really sucks!

Simply put megapixels don’t mean anything unless you have a good lens. DSLRs usually have higher quality lenses than compact. In addition a dSLR will have a larger digital sensor, which are more sensitive to light and handle “noise” so much better than point & shoots especially in low light situations.

Most compact cameras have an average range of 6-21mm. The standard dSLR lens is 18-55mm. Which are both great for close up shots. But dSLRs  have a lot more options with a push of a button, turn of the wrist of comes the lens and a new lens put on in its place! From a Macro lens for those up close shots, to a fish eye lens for a funky tilt look to, telephoto for capturing that squirrel 200 ft away in the tree to a fixed lens also known as a Prime. Your options for photography are endless!

So you probably know about JPEG because that is what you shoot in right now, but you aren’t quite sure about RAW. And to be honest is sounds a little scary. Well JPEG is a standard file that your camera saves to your memory card, it is automatically processed and ready to go. I like to equate it to a Polaroid. JPEG files can be relatively small or large depending on the settings you have on your camera. Unfortunately even at a large JPEG setting only 65% of the pixels will be used. So if you have an 18 megapixel camera, approximately 12mp are used in the capture of that image

RAW on the underhand is the cats meow! Unfortunately unlike JPEG it can not be used immediately but must be “processed” with a program such as Lightroom, Photoshop or Camera Raw. I like to think of it as going into a digital darkroom. When the image is capture it is saved as metadata. Once you begin to process is you can easily adjust exposure, white balance, highlights, shadows and so much more! And if you have an 18megapixal camera guess what? Capturing in RAW will use all 18 of those megapixals 🙂

I love the ability to control my shutter speed. But you can control so much more than that, ISO, Aperture, White Balance and the list goes on. I get to do the work! You might think but if I put the camera on Program (automatic) it will take great pictures right? WRONG! A camera is just a machine and machines are not perfect. You may not get that stop action shot, maybe you want the background blurry but everything comes in crystal clear because it decides to set the depth of field on its own. Having control to set different features gives your pictures that little extra something.

So what are you waiting for? Are you ready to make that leap to a dSLR? If you are worried about expense Amazon has some great deals on Canon & Nikon dSLRs 🙂

Thanks for joining OMST for our Semi-Monthly feature, Through The Lens Tuesday! Visit us the second and fourth Tuesday of every month. 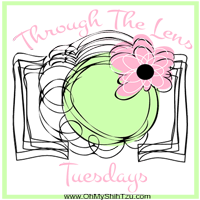